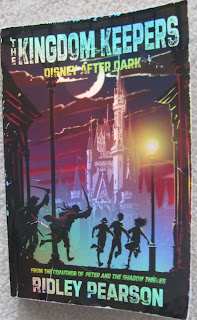 How would you feel about being a holograph for Disney? Your image would be in their park and help the guests to know the history of rides and kind of be a guide. In return you would get passes for your family to go to Disney World whenever they wanted. Sounds like a pretty great deal right? That’s what Finn, Charlene, Willa, Philby and Maybeck thought too. They agreed to let Disney make them into a holograph by being videoed and recorded. The only problem is that they’ve all started to have dreams of being in Disney World after it closes. Finn realizes one night that they are not really dreams, they are in Disney World as their holograph self. Finn meets an old man, Wayne, who tells him that Disney is about to be taken over by the villains from the movies and that it’s up to him and the other holographs to protect the park and figure out what’s been going on. This is a pretty serious responsibility for five teenagers. It involves some pretty crazy risks like climbing through the Matterhorn ride in the middle of the night. All the time, Finn and his friends realize that if they get caught, their holographs will no longer be in service and their families will lose their perks, because the teenagers have signed a contract stating that they will only be in the park with special permission. This was a fun book for kids, our 10 year-old loved it. I thought that it was kind of cool to get a bit of a behind the scenes peek at Disney World!

Aren't these stickers the cutest?! Thanks @jennyth

There was much excited squealing today when I open

There isn’t much I don’t love about Christmas.

It's a cover reveal kind of day! Check out this up

This is the fourth book in The Dread Penny Society

This book by @jennythebrave officially comes out n

Welcome to a Royal Bash! We'd love for you to join