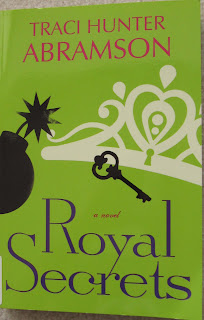 Alora DeSanto is making a life for herself with her two young sons, she had gone to the doctor Christmas Eve 3 years ago. Her youngest son had strep throat and needed a prescription, while she was waiting in line at the pharmacy she got a call from her husband Carlo that cut off in the middle. Then almost immediately she got a call from a neighbor saying that her home had blown up. She rushed home and found…nothing left of her house, her husband, parents and in-laws, because it was Christmas everyone was visiting her home. Her husband Carlo’s CIA status had been revealed and made him a target for some terrorists. Now 3 years later, the life insurance money that she’s been living on is about gone, and her best friend, Janessa Rogers, needs an assistant to help her plan her wedding to Prince Garrett of Meridia. Alora moves to the royal chateau in Bellamo just after someone had attempted to assassinate Prince Stefano, so he’s also there recovering from that attempt. Alora and Stefano’s paths seem to cross an awful lot and he’s so good with her two young boys, Dante and Giancarlo, that Alora can’t help but see him in a romantic light, even though he isn’t of her LDS faith. Is it possible for the two of them to break down the barriers between them and fall in love with each other. This was a really fun book, full of romance and mystery. The pages kept turning for me as I tried to figure out just who was behind all the treachery in the country of Meridia. I was way off, I love it when books aren’t as predictable as I expect!


Don’t forget to check out the great giveaway I have going on right now!

I hate seeing a good book series end! This one by

We ALL need something to look forward to! Did you

Today's book review is a book by @jenturanoauthor.

Happy release day to the newest book in the Prospe

Alright, here's today's peek into my mailbox. This

I'm trying really hard to remember that this Coron

If you're looking for a great book for your kids t

It's a pony tale kind of day at our house! How's e

Check out the cute skirt I got from @saltedavenue!

Here's a great book and series to read while you'r

This book by @1milkmansson is amazing! It's a true

Look what I found at Costco this morning. Spoiler

Do you have books you just can't put down? For me

I can't wait to read the newest novel by @authorly

I love a good series! This one is one of my favori

Do you read as an escape from reality? Sometimes I

We have a cute used bookstore near us, @thebookgar

PSA: you must read Promised by @leahgarriottauthor