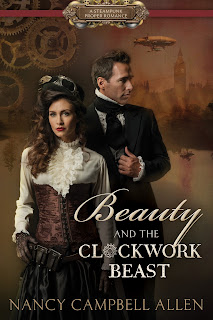 About the book: When Lucy Pickett arrives at Blackwell Manor to tend to her ailing cousin, Kate, she finds more than she bargained for. A restless ghost roams the hallways, werewolves have been reported in the area, and vampires lurk across the Scottish border.

Lord Miles himself is clearly hiding a secret. He is brash and inhospitable and does not take kindly to visitors—even one as smart and attractive as Miss Pickett. He is unsettled by the mysterious deaths of his new wife, Clara, and his sister, Marie. Could Miles himself be to blame for the deaths?

Working together, Miles and Lucy attempt to restore peace to Blackwell Manor. But can Lucy solve the mystery of Miles? Can she love the man—beast and all?


My review: I had heard of Steampunk Romances but quite honestly I had to look it up to know just what they were. Here’s what Wikipedia says they are: Steampunk is a subgenre of science fiction or science fantasy that incorporates technology and aesthetic designs inspired by 19th-century industrial steam-powered machinery.[1][2] Although its literary origins are sometimes associated with the cyberpunk genre,[citation needed] steampunk works are often set in an alternative history of the 19th century’s British Victorian era or American “Wild West”, in a post-apocalyptic future during which steam power has maintained mainstream usage, or in a fantasy world that similarly employs steam power. Steampunk may, therefore, be described as neo-Victorian. Steampunk perhaps most recognisably features anachronistic technologies or retro-futuristic inventions as people in the 19th century might have envisioned them, and is likewise rooted in the era’s perspective on fashion, culture, architectural style, and art.

Knowing just what it was helped me quite a bit, the story feels old, yet Lucy is riding in an airplane at the beginning. And knowing a little bit about what Steampunk Romances would include made things a lot more clear for me later. For me, the bottom line is that this is a cute, clean, fun romance that is a lot different from the normal story line of romances that I’ve read before. And did I mention that this book is part of Shadow Mountain’s Proper Romance Line???

I liked Lucy a lot. She’s a powerful young woman making a name for herself as a botanist in what would have really been a man’s world. She’s plucky and fun. And also fiercely loyal. I loved the way she went to care for her cousin Kate and refused to leave until she figured out just what was wrong and helped her to be better. And the way she was with Miles was amazing too, when she figures out his secret, she refuses to believe ill of him, no matter the evidence against him.

Miles….I really liked Miles too. He’s not looking for any kind of relationship, he knows that the curse he carries can be passed through the generations and he refuses to do that to his posterity. He was a true gentleman to Lucy, always looking out for her and I loved the way he believed her when she told him the crazy things that she had been seeing. His protective side was a sweet feature.

The plot of this one is fast moving and it’s a bit crazy. There are all sorts of mythical creatures, ghosts, vampires, and even a werewolf, all mixed in with traditional 19th century society, wars and intrigue. I highly recommend this one and I’m hoping for more coming soon in the Proper Romance line!

About the author: Nancy Campbell Allen (N.C. Allen) is the author of twelve published novels, which span genres from contemporary romantic suspense to historical fiction. In 2005 , her work won the Utah Best of State award. She has presented at numerous writing conferences and events since her first book was released in 1999. Nancy received a BS in Elementary Education from Weber State University. She loves to read, write, travel and research, and enjoys spending time laughing with family and friends. She is married and the mother of three children.

Do you like to read middle grade books? I have a f

What a great deal for Universal Orlando! Check out

This is a great book by @taylorfaithhart !I love t

Have you gotten a blowout before? @drybarutah trea

I have a hard time picking favorites. But…@traci

How can you not love a book like this? Even based

Today on mybookaday.com there's a book spotlight i

Happy book birthday to this great book by @summers

I love this book by @authorsophiasummers! There's

I love the way this collection is a fundraiser for

A few months ago, I read a book called The Match

I LOVE all books by @sarah_m_eden. Today's peek in

If you haven't read a Steampunk romance yet, I hig

I’m still trying to determine what Christmas is

Here's a book spotlight today on this one by Sara

This is one of my favorite types of books. I love

Thanks to @clarissa__kae for this beautiful surpri