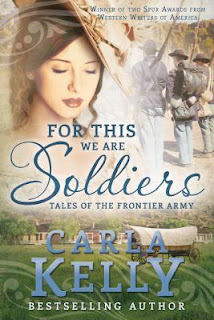 About the book: From master storyteller Carla Kelly comes this collection of frontier tales that take you behind typical army lines and into the hearts of ordinary men and women who perform extraordinary acts of bravery. From handsome hospital stewards and dashing soldiers to courageous children and wives who will pull at your heartstrings, there’s something for everyone’s fancy.

My review: I enjoyed reading this collection by Carla Kelly, each of the titles included is short, easily read and interesting. There was at least one of them that I had already read, “Break a Leg,” it was in the Old West Collection of A Timeless Romance Anthology and I remember reading it and liking it then as well.

This one has 6 tales written by Carla Kelly about women who would have been associated with the army after the time of the Civil War. That makes this fun, because you don’t usually hear about the women of that time period. I enjoyed reading each of the tales, some are longer than others, but they are all fairly short.

One of my favorites was the first one, “Such Brave Men,” It’s about Emma and Hart Sanders. Hart is sent on a campaign with his company, leaving Emma to fend for herself in Fort Laramie. All would have been just fine, except that Emma keeps being asked to move because her husband doesn’t have much seniority. I loved her attitude though, even though she’s just worked to get all settled, even cleaning out what appeared to have once been a chicken coop, she kept her sense of humor and was always kind to those around her.

I’ve been hoping for a new Carla Kelly novel to read, but due to some health issues, this is what she’s had time for this year. This is a cute collection that you’ll enjoy reading.

I was sent an e-copy of this book in exchange for an honest review.

About the author: Carla Kelly is a veteran of the New York and international publishing world. The author of more than thirty novels and novellas for Donald I. Fine Co., Signet, and Harlequin, Carla is the recipient of two Rita Awards (think Oscars for romance writing) from Romance Writers of America and two Spur Awards (think Oscars for western fiction) from Western Writers of America. She is also a recipient of a Whitney Award for “Borrowed Light,” “My Loving Vigil Keeping,” and “Softly Falling.”

I wasn’t sure what I was expecting when I opened

I love a good romance series. And bonus, this one

I love a good Christmas romance! So a book with mu

This book by @authorheidikimball was one that ever

Just one more month until this beauty by @sian_bes

Happy Tuesday! Here's the peek into my mailbox for

Win for you and a friend! In celebration of our l

Only three weeks until the next installment in the

I LOVE a good rom-com. @kikimojo is amazing at wri

I’ve been wanting to read this book for a while.

This looks like a great book for kids! Coming soon

I LOVED this book. It has it all, great characters

I can not wait to read this one by @traciabramson!

I love a good book with some suspense. That’s on

Happy Tuesday! Here's the book I found in my mailb

@rachaelreneeanderson books are some of my favorit

If I’m in the mood for a romantic suspense book,