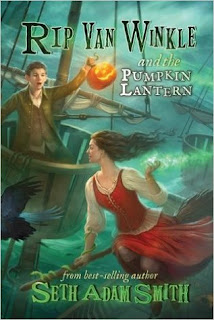 About the book: Chased by a vengeful witch, hunted by an undead corpse, and guided by a secretive preacher, a boy must protect a magical lantern that can either save Boston . . . or destroy it.

In October of 1730, young Rip Van Winkle sneaks into a graveyard and comes face-to-face with the ghost of William Blaxton, the first settler of Boston. Warning Rip that the city is in danger, Blaxton gives him a mysterious gift: a pumpkin lantern with power over life and death. Before fading into midnight, the ghost tells Rip to take the lantern to Feathertop, a mythical pumpkin-headed scarecrow.

Pursued by Mistress Hibbins, a witch of terrifying power, and hunted by the nightmarish Midnight Minister, young Rip must rely on the aid of Jonathan Edwards, a stern and secretive preacher, and Nathaniel, a talkative, know-it-all raven. Guided by the magical light of the lantern, Rip races across New England to find Feathertop, save Boston, and become a most unlikely hero!

From the bestselling, award-winning author Seth Adam Smith comes The Pumpkin Lantern–a fantasy novel influenced by the writings of Nathaniel Hawthorne, Lloyd Alexander, and C. S. Lewis. Loaded with humor, action, suspense, and fascinating American history, The Pumpkin Lantern is also a poignant fable about faith, family, and the power of life over death.

“Be warned, Smith has crafted something you won’t want to put down.” -Jason F. Wright, New York Times Bestselling Author.

My review: I enjoyed this book. I enjoyed the way that the author has taken American History and mixed it with fables, tall tales, characters like vampires and plenty of imagination. I loved Abigail from the beginning. How many women would have had a dream of a newborn baby in a grave in the graveyard and then gotten up and gone to check and see if there really was one? And then taken in a whole bunch of other children as well? Not very many. I loved the way that the Van Winkle’s home became, “The Belonging Place,” because we all need a place where we feel like we belong. Their home was that place for many children who needed them, including Rip.

Rip is a great character too. I loved the way he felt he was to blame for this awful tragedy happening, but yet still able to look beyond himself and see the needs of others around him. I love his unselfishness in this story, many times putting the needs of those less fortunate then himself above his own, that’s not normal for a young man of his age. There is a spot near the end where Rip is shown just how he’s affected others. I love that scene, there’s something a bit silly about it, but as I think about it, it’s really metaphoric for all of our lives. There are things in our lives that only we can do, people that only we can touch and help and we need to make sure that we’re doing those things as best as we can.

I love that this is a middle grade book and that I can learn something this deep from it. This is an enjoyable book that was fun and easy for me to read.

About the author: Seth Adam Smith is a best-selling, award-winning author and blogger whose writings have been translated into over thirty languages and featured on the Huffington Post, Good Morning America, Fox News, CNN, the Today show, Forbes, and many other news outlets around the world. In 2015, his book “Your Life Isn’t for You” was awarded a gold medal for inspirational memoir.

A survivor of a suicide attempt in 2006, Seth is an advocate for resources and understanding concerning depression and suicide prevention, and he regularly writes about these topics in his books and on his blog. He and his wife, Kim, currently live in Arizona but have “belonging places” throughout the United States. He recently published “Rip Van Winkle and the Pumpkin Lantern,” and is currently working on a series of historical novels set in Colonial America. Learn more at www.SethAdamSmith.com.

It’s not often that I pick up a book of poetry.

Today's peek into my mailbox features these two be

Pssttt.... did you know that if you're a Californi

I had heard good things about books by @beckywadew

I haven't taken the time to read a book by @rachel

I can’t even imagine waking up one morning to fi

This post in just for fun! My friend @nonrunnercoo

I’m loving these Romance on the Orient Express b

Go enter this giveaway! 25 winners will get an aud

Here's another book I found in my mailbox recently

Check out this upcoming movie @ldsmissionstories.

The haunting in this book was not quite what I exp

I hadn’t read a book by @kristiannhunter before.

Here are a couple more books with book birthdays t

Happy book birthday to this beauty by @authorlyjen

This book by @johanna_loves_books is my favorite k

I have found so many amazing books in my mailbox i

I love the way @camicheckettsbooks set up the seri

This is such a fun contest! #Repost @authorjosisk