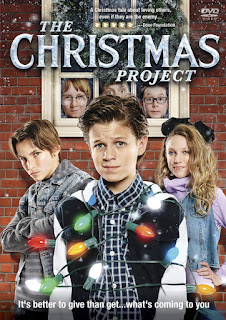 About the movie: Even with Christmas around the corner, for the Buckley boys, payback almost always wins out over brotherly love. That is until the four brothers join forces against a common adversary—the Hagbart’s—the meanest bullies at their middle school. But now Mom has decided that the Buckley family is going to Elve the Hagbart’s this year for Christmas. Eleven-year-old Matthew can hardly stand it. By day the Hagbart’s torture the Buckley brothers into submission, and by night the Buckley’s secretly deliver Christmas treats and gifts to their sworn enemies. Soon the war of wits escalates to an incredible scheme designed to get the ultimate revenge on the Hagbart’s. But now that Matthew has been learning that he’s supposed to do good to those who hate him, what will he do when a little push becomes a great big shove? The Christmas Project is a heartwarming comedy the whole family will love.

My review: This was a super cute movie! I loved that as I was watching it, it felt like Christmas time, so much that when we finished I was kind of sad to be reminded that it isn’t even quite Halloween yet!

The plot of this movie feels a little bit Christmas Story-esque, maybe just with the way it seems to be narrated by a grown up talking about Christmas from his youth. I liked the way the Buckley family has a tradition that each of their boys love, and that that tradition is “Elving” other families at Christmas time. That really makes this movie cute, although it’s kind of obvious from the beginning just who they’d be elving this year.

I liked the characters. The Buckley boys reminded me of my own brothers at that age, constantly messing with the others, but there was also tons of love and fun with the boys. And I love the treehouse they share with their dad. I liked the parents too, the mom is hilarious, always wearing pink to try to make it so the baby she carries is a sister and not another brother. The dad is a great buddy to all the boys and when he makes a mistake, he genuinely feels bad.

And, of course, there are the Hagbarts, they seem to be about the meanest kids in school. And they’re always picking on the Buckley boys, even though they try to stay out of their way. I liked how we were able to see them in a different light as the story went on. And the ending between the rivals was cute.

I also like that this was a movie that our whole family could watch together with no problems. This is a cute Christmas story to add to your movie watching tradition if you have one, and if you don’t: Why not start???

I was sent a link to watch this movie early in exchange for an honest review.