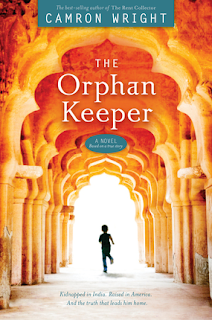 About the book: Seven-year-old Chellamuthu’s life is forever changed when he is kidnapped from his village in India, sold to a Christian orphanage, and then adopted by an unsuspecting couple in the United States. It takes months before the boy can speak enough English to tell his parents that he already has a family back in India. Horrified, they try their best to track down his Indian family, but all avenues lead to dead ends.

Meanwhile, they simply love him, change his name to Taj, enroll him in school, and make him part of their family. And his story might have ended there had it not been for the persistent questions in his head: Who am I? Why was I taken? How do I get home?

More than a decade later, Taj meets Priya, a girl from southern India with surprising ties to his past. Is she the key to unveil the secrets of his childhood or is it too late? And if he does make it back to India, how will he find his family with so few clues?

From the best-selling author of The Rent Collector, this is a deeply moving and gripping journey of discovering one’s self and the unbreakable family bonds that connect us forever.

This is one of those books that if you didn’t know it’s based on a true story, you would say there’s just no way this stuff could have happened. I thought that Chellamuthu’s life when he lived in India was crazy. He’s a 7 year old boy living in India with his family. Many times he didn’t have enough food to eat and there are plenty of boys out there that had it even worse than he did. And in the story, those boys are the ones that cause trouble in his life. I can’t even imagine being kidnapped and removed from my family at the tender age of 7 years old. The grief that Chellamuthu must have felt must have been immense, and as a parent the grief that his parents felt seems incomprehensible to me.

I love the way this book is written from the point of view of this boy. I loved reading his story and trying to understand just how things would have been for him. I loved “travelling” from my nice home to the crazy land of India where there’s tons of humanity, much of it starving in this book. I love the dedication, it’s dedicated to “The lost child in all of us, searching for home.” That sentence just makes me think. But my favorite part has to be the ending, learning just where this young boy ended up and how he works to help not only his family, but many other families just like his in India.

This book touched me, as I finished reading the final chapter, I found myself crying. Such a sweet ending. Such an amazing story and hopefully I learned something from it that I can remember in my own life.

About the author: Camron Wright holds a master’s degree in writing and public relations. He says he began writing to get out of attending MBA school, and it proved the better decision. His first book, Letters for Emily, was a Readers Choice award winner, as well as a selection of the Doubleday Book Club and the Literary Guild. In addition to North America, Letters for Emily was published in several foreign countries. Camron lives with his wife, Alicyn, in Utah. They are the parents of four children.

I really enjoyed this book by @authorhbmoore . It

I can't wait to read this one by @sian_bessey and

I love these books set in Creekville! The characte

This book is coming out so soon! I can't wait to r

I'm going to do today's post a bit differently. I'

I found this amazing book by @laurielclewis in my

I’ve been loving this series by @kimberly_krey !