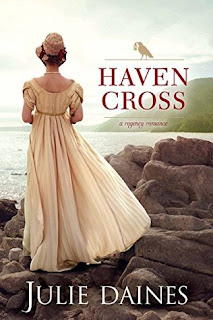 About the book: When a shocking scandal involving her father spreads through London society, Elaine Cardinham and her parents are forced to retreat to their country home in Cornwall for refuge. But Havencross is no sanctuary for Elaine. She is haunted by the mysterious disappearance of her brother—and the heartbreak she left in her wake all those years ago. It has been five long years since Gareth Kemp last saw Elaine—when she rejected his marriage proposal. Her reappearance convinces him of one thing: he has never stopped loving her. To put his feelings for her aside, he focuses his attention on the dangerous smuggling plaguing the Cornish coast. As Elaine attempts to run from her past, she ventures ever closer to a dangerous truth—and Gareth may be the only one who can save her from a deadly finish.

My review: This is really a fun book. I thought that the story was great, it’s got a fun romance element, mystery, danger, suspense, pretty much everything you want and more than your usual regency romance has.

I liked Elaine. Her life is a bit confusing as the story starts. Her family is headed home from London because her father was caught in a scandal. Both Elaine and her mother are mortified, but at the same time, something doesn’t quite seem right to Elaine. Havencross is their home, but at the same time, not somewhere the family likes to be because of the disappearance of Elaine’s brother. And things are far more complicated for Elaine because of Gareth, the man she’s already refused one offer of marriage from. This makes her interractions with him awkward to say the least.

I also liked Gareth. I liked the way he was able to overlook Elaine’s refusal and still be able to help her when crazy things start happening. Things like finding a woman bleeding in a cave only to have her disappear when she returned to help.

Then there’s the whole smuggling aspect. The time and place are confusing for all involved because no one knows who is a smuggler and who they can trust to help with the smuggler. And the real culprit was surprising in the end!

I really enjoyed this regency romance! This one is so fun and suspenseful, you won’t want to stop reading until you’ve finished!