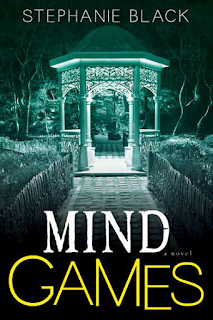 About the book: Psychologist Natalie Marsh’s dream is now reality: her mental health services clinic has opened and is houses in an elegant, newly renovated nineteenth-century building. Unfortunately, not everyone is happy with the clinic’s presence, including Heather Osbourne, a troubled young woman who wholly objects to the occupation of the building. Heather has spent years wandering the halls of the abandoned structure, convinced she’s communing with her ancestor’s ghost. When Natalie thwarts Heather’s attempt to leap from a window, the shaken psychologist soon realizes Heather’s failed jump is merely one piece of a disturbing puzzle. Greed and deceit are weaving a web around Natalie, and someone will stop at nothing?—not even murder—to get what they want. Stretched to her breaking point, Natalie struggles to learn the truth, but only one thing is clear: nothing is as it seems.

My review: Stephanie Black really is a master at the mystery/suspense category. Each and every one of her books is full of amazing suspense. Reading this one made me almost a little wary to go out, what if I came back to a dead body. Then I reminded myself that this is only fiction…I’m not going to find a dead body!

I really like the way Stephanie Black writes these. In this one, you see the story from multiple viewpoints. Natalie, Gideon, Ainsley. But even seeing it from so many perspectives, I had no idea who could have been after Natalie. That’s part of what made it so fun!

I love the characters. Natalie is really amazing, she’s been through so much already between her mom and her sister. Now she just wants to help people who can’t help themselves. She’s a psychologist and she’s just opened her new mental health clinic. But she opened it in a beautifully renovated building that’s popular with all kinds of other businesses and they want nothing to do with her business being there. I love that she’s not willing to give up her dream to bow to the other people’s wishes. But things keep getting crazier and crazier and all of the evidence seems to point to Natalie, that she’s the one who is killing and causing problems for everyone. Even with all of this, Natalie keeps trying to go on doing what makes her happy, helping others.

The other characters are great too. I really liked Gideon. I liked the way he goes out of his way to help Natalie with everything. He feels so concerned when he can’t figure out just who is causing the problems either.

This one had tons going on in the plot. There’s the main conflict of the Natalie and her clinic. But there’s also Ainsley and Stuart and the problems they make for themselves. I loved the way it kind of all tied in in the end. And the main bad guy was such a surprise for me at the end. There’s no way I would have ever guessed just who it was. This was such a great one! I loved the amount of suspense, and it really made me not want to put it down until I got to the very end!

About the author: Stephanie Black has loved books since she was old enough to grab the pages, and has enjoyed creating make-believe adventures since she and her sisters were inventing long Barbie games filled with intrigue and danger or running around pretending to be detectives. She is a three-time Whitney Award winner for Best Mystery/Suspense, most recently for Cold as Ice (2010). Stephanie was born in Utah and has lived in various places, including Arizona, Massachusetts, New York, and Limerick, Ireland. She currently lives in northern California and enjoys spending time with her husband Brian and their five children. She is a fan of chocolate, cheesecake, and her husband’s homemade bread.

This post contains an affiliate link, which simply means that if you click the link, I may receive a small amount of money from any purchase you make.

If you're a fan of romcoms, you really need to rea

This book was really interesting! It’s not your

I love this fun contest every year! #EzRepost @ld

I'm loving these Top Flight romances! This one's b

I love a good collection! I can't wait to read the

Don't you just love the cover of this book by @tay

I loved Enduring Promises of the Heart  by @thev

This series by @authorhbmoore is one of my current

Thanks to @cedarfort I found this lovely book by @

There were so many things to love about this book!

I finally got to read Flying in Love by @lintonlov

Happy Tuesday! Here's a little peek into what chil

If you're needing a romantic escape, this one by @

If you love a good Regency romance, you should che