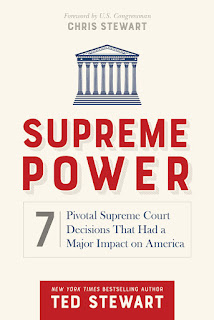 About the book: Bestselling author Ted Stewart explains how the Supreme Court and its nine appointed members now stand at a crucial point in their power to hand down momentous and far-ranging decisions. Today’s Court affects every major area of American life, from health care to civil rights, from abortion to marriage.

This fascinating book reveals the complex history of the Court as told through seven pivotal decisions. These cases originally seemed narrow in scope, but they vastly expanded the interpretation of law. Such is the power of judicial review to make sweeping, often unforeseen, changes in American society by revising the meaning of our Constitution.

Each chapter presents an easy-to-read brief on the case and explains what the decisions mean and how the Court ruling, often a 5-4 split, had long-term impact. For example, in Lochner v. New York, a widely accepted turn-of-the-twentieth-century New York State law limited excessive overtime for bakery workers. That law was overturned by the Court based on the due process clause of the Constitution. The very same precedents, Stewart points out, were used by the Court seventy years later and expanded to a new right to privacy in Roe vs. Wade. making abortion legal in the nation.

Filled with insight, commentary, and compelling stories of ordinary citizens coming to the judiciary for remedy for the problems of their day, Supreme Power illustrates the magnitude of the Court’s power to interpret the Constitution and decide the law of the land.

My review: This is not the type of book that I normally read, but it really sounded interesting to me and I’m so glad I took the time to read it!

I really enjoyed this book! I like the way the 7 cases are presented. The way they are written is just interesting, it made me want to learn more. I liked that the author talks about the case, the events leading up to the case, the way the Supreme Court ruled, what changed because of the way they ruled and even how they used that ruling later in other cases.

Just how much I liked this one actually surprised me! I thought the author did a fantastic job with how he presented everything in this one! Grab your own copy!

About the author: Ted Stewart was appointed as a United States District Court Judge in 1999 by President Bill Clinton. Prior to that, he served as chief of staff to Governor Michael O. Leavitt, as executive director of the State Department of Natural Resources, as a member and chairman of the Public Service Commission, and as chief of staff to Congressman Jim Hansen. He has been a visiting professor at two state universities, teaching courses in law and public policy. He is the New York Times bestselling author of The Miracle of Freedom: 7 Tipping Points that Saved the World.

This post contains affiliate links, which simply means if you click my link and make a purchase I may receive a small amount of money.

Aren't these stickers the cutest?! Thanks @jennyth

There was much excited squealing today when I open

There isn’t much I don’t love about Christmas.

It's a cover reveal kind of day! Check out this up

This is the fourth book in The Dread Penny Society

This book by @jennythebrave officially comes out n

Welcome to a Royal Bash! We'd love for you to join