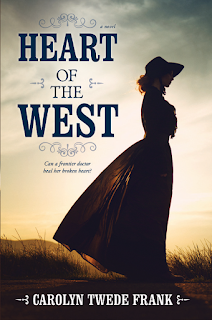 About the book: Independent-minded women are considered highly unsuitable in Kate Donahue’s wealthy Long Island society. Yes, Kate would lead a proper life should she marry, but her dream of practicing medicine would surely be thwarted by her domineering fiancé. To follow her dream, she must take dramatic measures. So when she reads a newspaper ad seeking a qualified small-town physician, Kate embarks on a new life in the Wild West.

Upon her arrival in the rugged settlement of Craig, Colorado, Kate is disappointed to discover that even in the West, no one wants a woman doctor. As she struggles to establish her practice, she is kept busy fending off the unwanted attentions of a local rancher, a man unnervingly reminiscent of the ex-fiancé she left behind in New York. Romantic entanglements are the last thing on Kate’s mind. That is, until she meets Lucas McCurdy, an Irish immigrant with whom she feels an undeniable connection. But when their relationship inflames a dangerous land battle, Kate and Lucas find themselves defenseless in a lawless town—a perilous position that may cost them everything.

My review: I loved this book! I loved the characters, the setting, the plot line. I really didn’t want to put it down until I had finished the whole book. And I read this one really quickly too!

Let me tell you about Kate. She’s a young woman of privilege in 1895, she grew up in New York City and I’d say she kind of tricked her parents into letting her train to be a doctor. She didn’t tell them until she’d finished. By that point she was engaged and her fiance wanted nothing to do with being married to a doctor. So, she defied her parents, broke up with her fiance and headed for nowhere Colorado by herself. I love the pluck she shows. Not only does she head there by herself, but she figures out how to set up a business in a town that starts out wanting nothing to do with a female doctor and she makes it work. I can’t tell you how much I love her character!

Then there’s the men of the town. You don’t see any of the story through their perspective, but it’s fun to mention a few she meets. There’s Stanley Jones, she meets him right away. He isn’t terribly nice and he pretty much thinks he’s the best thing around.

There’s Logan Jones. I love the way Kate meets Logan and doesn’t really know who he is. And when it’s revealed, I love the way she treats him. She’s kind and generous and helpful, which she pretty much is to everyone. But Logan deserves it more!

And last of all Lucas McCurdy. I love the kindness he shows constantly to Kate. He helps her with things and he’s there when she needs him the very most.

And there’s countless other characters in this one that I love! I really hope for more books by this author about them! I’d love to see a story about Susannah, Sunny, and Rosie and maybe even Ronald Smith. And if she needs to, maybe Stanley Jones as well.

This is not your normal romance set in 1895. I love the way the plot is quite a bit different from what you normally see. It left me wanting more!

About the author: Carolyn Twede Frank lives in Kaysville, Utah with her husband and teenage daughter, her other four children, having fled the nest, still live close by. In 1994, she incorporated her basement sewing business, eventually moving it into a warehouse, hiring more people, and developing her unique line of puppets and educational curriculums into a full-fledged, international business. She sold the main arm of her business in 2009, retaining a small portion to bring in income while she pursued her writing career. She has been writing seriously since 2006.

This post contains an affiliate link, which simply means if you click my link and make a purchase, I may receive a small amount of money.

I can't wait for this upcoming book by @sarah_m_ed

I love a good rom-com! This one by @bellarickswrit

Happy Thursday! Here's a book by the talented @jen

@traciabramson is one of my very favorite authors.

Great pre-order deal on this one by @authorannekaw

Today's peek into my mailbox. Check out this fun m

I love books like this! @steventcollis is great at

I loved this book so much! @authorkarenthornell do

I'm so excited to get to read this one by @authora

This book was so amazing! I loved getting to read

I love getting fun book mail from authors. Check o

I’ve been looking forward to this book by @jenny

What an exciting week! Halloween Time at the Disne

I am really loving this series by @authorjennifery

I got a few fun bookish things in my mailbox while

I love a good series. And this one is really dragg

I've loved all the books I've read by @ganellyn. H

You never quite know what you’re going to get wi